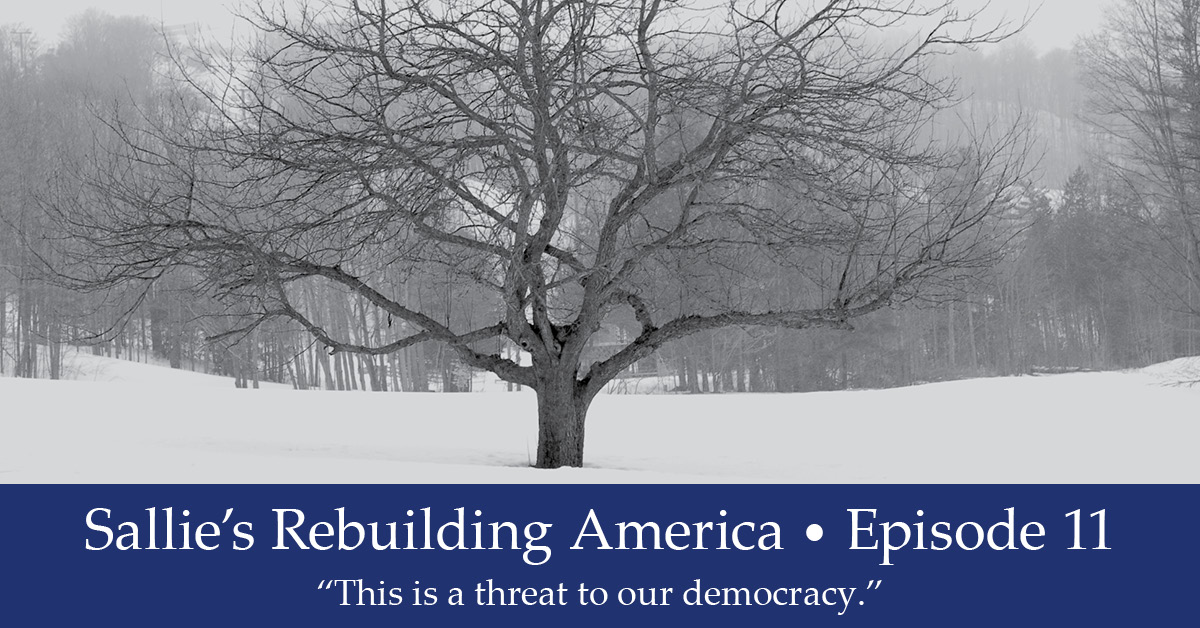 Welcome to Wednesday’s episode of Sallie’s Rebuilding America. Today I have a special edition for you. It’s one very short video, not made by me. If you haven’t seen this before, I sincerely hope it shocks and disturbs you. Note these are all the major networks. This is not only one network doing this. If you have watched this before, I hope you watch it again with fresh eyes given all that is currently going on in our country. In fact, I encourage all of us to watch it a few times today and think about what they are saying and what they are doing.

(More comments from me after video.)

Everything is a threat to our democracy to the people in control. That’s because they view their ability to rule over us unquestioned and unhindered by trivial details such as elections as their twisted version of “democracy” in this country.

If you are still depending on the mockingbird media for your news, you will never ever know the truth about the world around you. You simply will not. They will not tell you the truth. They have one agenda and that is to promote the official narrative handed down by their overlords.

Think I’m being a bit extreme? How else do you explain this video? Leave a comment and let me know another way to explain this video and all of the lies we have been fed by the media regarding every single significant story in the past six years. Would it be incorrect to say every significant story has been covered with a narrative that was contrary to the actual truth that was revealed over time? In fact, leave a comment and tell me which significant news stories over the past five or six years have been covered carefully and accurately by the mockingbird media.

As always, comments and discussions are welcomed and appreciated.

See the background explanation of this series of posts (previously called Sallie’s Stack of Stuff):

Relevant Background Posts (if you are new to my website):

Other places to connect with me:

I’m Sallie, Christian wife, mother, homeschooler, small business owner, and homebody. Current events analyst. One of the weird sheep. Frequently contrarian. Traditional and conservative both theologically and politically. I value liberty to live quiet and simple lives. If you are looking for a Pollyanna with normalcy bias, you are in the wrong place. Welcome! ♥

~ Welcome to the new website! Thank you for your patience as I get things unpacked and organized. There are a number of broken links and I'm fixing them as quickly as I am able. If you find one, feel free to tell me in a comment on that post.

~ Did you put on the Armor of God this morning? See below in sidebar.

Understand The War We’re In

Stand therefore, having girded your waist with truth, having put on the breastplate of righteousness, and having shod your feet with the preparation of the gospel of peace; above all, taking the shield of faith with which you will be able to quench all the fiery darts of the wicked one. And take the helmet of salvation, and the sword of the Spirit, which is the word of God; praying always with all prayer and supplication in the Spirit, being watchful to this end with all perseverance and supplication for all the saints— and for me, that utterance may be given to me, that I may open my mouth boldly to make known the mystery of the gospel, for which I am an ambassador in chains; that in it I may speak boldly, as I ought to speak.